How to Spot a Dishonest Contractor Before It’s Too Late

How to Spot a Dishonest Contractor Before It’s Too Late

There’s no shortage of renovation contractors these days…but how do you know if they’re any good? The number of dishonest contractors may surprise you.

Here at GreatBuildz, a free service that connects homeowners in Los Angeles, Orange County, Ventura & San Diego with reliable general contractors, we spend lots of time screening contractors to find the best ones – here’s my own personal experience.

My dad was an electrical contractor for over 40 years.

When I was a teenager growing up in Northern California, my summer job was always working for my dad. With my mom’s help, my father operated a small business as an electrician. So, from the age of thirteen, I spent my summers learning the trade by working on jobs along with him.

Working with family isn’t always easy or fun, but I’d say it taught me some valuable lessons. I picked up some electrical knowledge, but maybe more importantly, I learned some lessons about human nature and human interaction.

I like to think of my dad as an honest and hard-working man. He worked his entire life to support his family, he didn’t take handouts, and stayed out of debt. Him and my mother were married 50 years before he passed away. I’d say he was a solid, upstanding man.
While I worked with him, I witnessed his interactions with our customers. Although I believe he was generally honest in how much he charged clients, I could tell there were times that he stretched the truth to get a higher fee. I don’t hold it against him or think worse of him, much of that is human nature.

But, I feel it’s important now to share my knowledge so others can get a better understanding of how a dishonest contractor might think and act.

Even in today’s age, the contracting profession is still kind of the “wild west”.

There is absolutely no consistency in cost, quality, or most other factors between two companies, let alone an entire industry. It’s almost impossible to compare two companies one-to-one.

Furthermore, the customer generally has no idea how much various jobs should cost. So, in a way, its kind of hard for a contractor to decide what to charge someone for a specific job. Many times, their thought is ‘I’ll charge as much as I can get away with and not anger the client’.

If you think about it, this is no different than what most of us would do when faced with an opportunity to earn some money. For example, say a stranger wanted you to clean the leaves from his gutters and asked you what you would charge him. Presumably, your customer doesn’t know what a task like this should cost. How would you come up with a price? You’d want to maximize your revenue without making the price outlandish.

One tactic most homeowners use to avoid getting ‘taken’ is to get three estimates. While that’s a very good start, it still doesn’t solve the core issue. 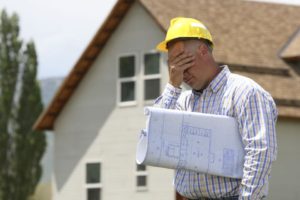 Once you have your three bids, how do you choose the right one?

Picking the lowest price makes sense at first, but then you run the risk of hiring a dishonest contractor. He may bid low, then intend on making up for his low bid by ‘nickel and dime’-ing you with many change orders during the job.

For all these reasons and more, it’s important not to make your decision purely on the lowest bid.

So, as a homeowner, what’s the answer to this conundrum?

Educate and Prepare yourself!

When you consider buying a new car or a new appliance, you likely do some research online first. Since construction projects are a much more complicated transaction, it’s even more important that you do your research. Trust me, do not choose a contractor only based on your ‘gut feeling’ after getting an estimate. You know that saying, “Failing to prepare is preparing to fail”? That could not be more true when it comes to hiring a good contractor.

Before you hire a dishonest contractor, here are some tips to educate and prepare yourself:

If you’re in the middle of screening a contractor yourself, or even if you’ve just started planning a home renovation project, give Greatbuildz a call. Our friendly GreatBuildz staff can help make sure you’re in good hands, then support you throughout your project – all for free.

Hi, we're Paul and Jon - Co-Founders of GreatBuildz. We believe everyone deserves to find a great contractor, have a stress-free renovation, and enjoy their beautiful new space. There are so many contractors out there and it's often hard to tell the good from the bad... until it's too late. We started our company to help simplify your contractor search and help you have a stress-free renovation experience. We're always available to help, no matter where you are in the process.

We Make It Easy To Find A Great Contractor

GreatBuildz matches you with reliable, pre-screened general contractors and takes the stress out of renovating – at no cost to you.